Create the Future of Your Dreams

It seems presumptuous to suggest that you can create the future. In fact, most people go through life believing the events that happen in their lives are out of their control. They believe it’s the boss, the bureaucrats, the politicians, or the government that holds all the power. Professional salespeople know different. 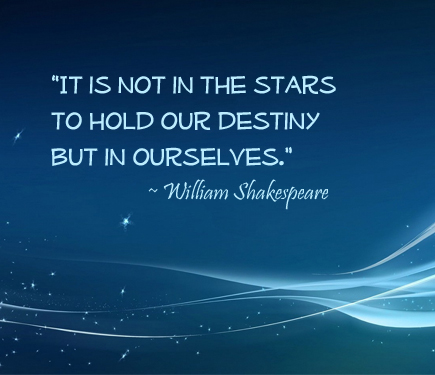 They know that in order to get what they want in the future, they have to take action today. They understand cause and effect. If they want to increase their income in the future, they have to earn the right to have a higher income by working harder or smarter today. If they want a better job, they find a better job. A woman once told Earl Nightingale he was so luckyto live in California and he responded: “It had nothing to do with luck. I decided to live in California and I moved there.”

Creating your future starts with vision. John F. Kennedy could see a future in which we walked on the moon. Dr. Martin Luther King could see a future where people would be treated equally. (We’re still working on that one, but there have been tremendous strides since his “I have a dream” speech in 1963.) Sir John A. MacDonald envisioned a confederation of Canada. Chris Hadfield, beginning at the age of nine, created a future for himself in which he would walk in space.

These are all grand visions and aspirations that, at the time, were denounced as unattainable, ludicrous, or ridiculous. Not only did these individuals have to believe in that future themselves, they needed to convince hundreds and in some cases millions of people to buy into their vision. And, through their hard work, power of persuasion, and sheer force of personality, they moved mountains to create the future they wanted.

What is your vision for the future? It might be very personal – the home you live in, the job you do, the family traditions you observe, your state of health, or your financial security. Or it may be a vision for your community – the quality of education, the safety of the streets, the quality of life, the way municipal politicians advocate for certain projects. Or it may be a grander vision for your province, your country or your world.

While we can’t control everything, we can control a whole lot more than we give ourselves credit for. Can you create a better future for yourself and others? Indeed you can.