Chris Hadfield’s book, An Astronaut’s Guide to Living On Earth is full of fascinating stories and tips for success, all told with self-deprecating humour. Hadfield attributes his success to hard work and persistence. What shines through is his humility and respect, even though he has achieved incredible success and experienced events that most of us only dream about. 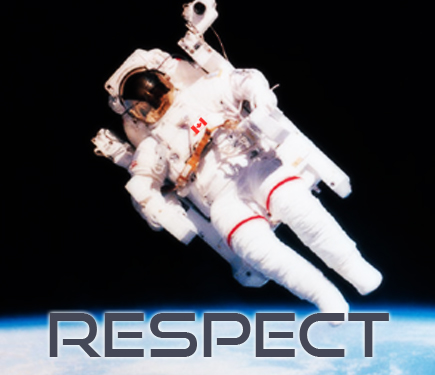 I expect that respect is one of the reasons he has done so well. He took nothing for granted. He never presumed that he was the star who deserved to get the opportunities. Instead, he worked hard for every one.

He had respect for the technology and the science. As a fighter jet pilot he understood how a multimillion-dollar mechanical device in the hands of a well-trained human could do ‘the impossible’. He also knew how quickly things could go wrong. Once, as a result of a mechanical problem, he lost consciousness for 16 seconds – a lifetime if you’re travelling at 470 mph! His job, as a test pilot, was to make flying safer so he helped ensure that wouldn’t happen to anyone else.

He had respect for the career. He decided when he was nine years old to become an astronaut and from that point on, when faced with decisions, he would ask himself, what decision would an astronaut make? Vegetables or chips? University or military college?

He had respect for the taxpayers. He understood that they had invested millions into his education and training. He committed to repay their trust with success.

He had respect for his fellow astronauts and cosmonauts. He speaks glowingly of his colleagues and the pioneers who had paved the way for him.

He had respect for danger. He lost a number of friends and colleagues to accidents. It motivated him to be meticulous in his role as test pilot to make planes as safe as they could be. He was constantly on the lookout for the next thing that could kill him. He had a rule, “Always sweat the small stuff.” It was the small stuff that could be deadly if left unattended.

Business owners could learn a lot from his experience:

Because of his considerable respect for others, Chris Hadfield has become one of the most respected astronauts of his time. A modern Canadian hero!