If you want to make a great difference to how people feel, start showing you care by asking “why.” Don’t just accept the status quo and it will have a positive effect on the bottom line. In their book,Beyond Performance, Scott Keller and Kaleen Love describe the technique of laddering, which is very similar to the 5 Whys concept. Laddering asks five “whys” to determine how people are feeling and to get to the root cause of issues. This technique, which can and should be applied when things are not working, can also be used to determine what went well so those same behaviours can be applied in the future. 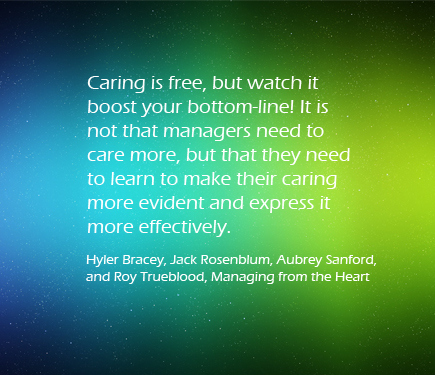 Keller and Love illustrate laddering by using the example of a bank that discovered its sales per banker were lagging behind the competition. The leaders headed down the traditional, process-based path and asked “Why are sales per banker lower?” They found that bankers were not spending enough time with customers. Then they asked “Why aren’t bankers spending more time with customers?” Because, they found, a significant amount of bankers’ time was spent completing paperwork.

The bank’s leaders had their diagnosis, and set about reengineering the loan-origination process to minimize paperwork and maximize customer-face time. They also provided bankers with new sales scripts and easier-to-use tools so that bankers knew just what to do with the extra time they had with customers. The bankers were trained, the tools were rolled out, and, leaders confidently thought the problem had been solved. Six months later, time spent with customers had changed little and sales had barely improved.

Faced with this, the bank’s leaders began to ask “why” again. Why wasn’t the new process working?

Through focus groups with the bankers, the leaders quickly realized that most of the bankers found customer interactions uncomfortable and actually preferred paperwork to people. Asking “why” again, the leaders learned that many bankers were introverted, had poor interpersonal skills, felt a sense of inferiority dealing with customers who had more money, and saw salespeople as hucksters, not professionals. Furthermore, their supervisors, who were mostly former bankers, were just as insecure, so they, too, placed more emphasis on paperwork than people.

Clearly, no new process was going to work as long as the bankers’ mindsets were so opposed to the basic goal of spending more time with customers! In response, the bank’s leaders radically revamped their change program to include training on being aware of one’s own and others’ personality types; building emotional intelligence; and changing bankers’ notion about their role as salespeople from “pushing products” to “helping customers discover and fulfill their unarticulated needs”. Within six months, customer-facing time and sales improvements were back on track. The bank eventually generated significantly better results than aimed for, achieving a 43% increase in bankers’ cross-sell ratio compared with a target of 20%.

Asking “why” and getting to the heart of an issue, understanding people’s mind sets, discovering what is actually holding them back, as well as what would drive a person forward can make a big difference. Getting to know people and how they feel shows caring and caring can have a positive impact on the bottom-line.