Never in my wildest dreams did I imagine I would close my call-centre. In my mind, obstacles were simply temporary inconveniences; falling revenues an indicator that we needed to do something different. Losing money was a challenge, a puzzle to be solved. Positive thinking, which had been ingrained in my belief system for over 30 years, would enable us to persevere, find the solutions, and turn things around.

But that’s not what happened. 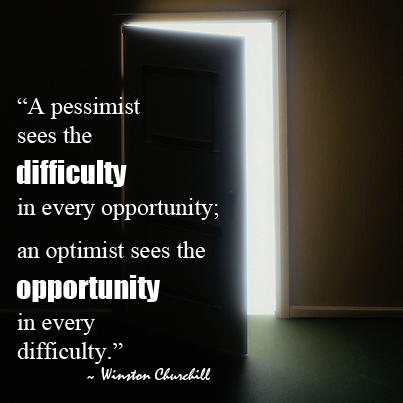 There’s a fine line between positive thinking and willful blindness. In retrospect, the facts were undeniable and they were right in front of me. In spite of having our best year ever just a few months earlier, the business began losing money every quarter. Longtime customers were in worse shape than we were, so they were cutting back, including their business to us. Our attempts to open new markets and investments in new technology were not paying off quickly enough. Reports from the management team were not encouraging.

Our largest customer dealt the final blow, announcing that they wouldn’t need our services anymore. The truth finally sank in. Our ship was going down and nothing short of a miracle would save it. My positive thinking didn’t extend to miracles. And while I was in the process of preparing my business for sale, we ran out of time.

How could this happen? The positive thinking belief system had worked so well for me over the years.

It’s all about change.

Our world has changed. Traditional businesses that were profitable a few short years ago are closing their doors or laying off hundreds of people in order to stay afloat.

Ethics have changed. Some customers have decided that paying their bills is optional.

Employees have changed. Many don’t have the sense of loyalty and commitment that you could once count on.

Most importantly, and I speak for myself, WE have changed. We’re older. So maybe the energy, drive, determination and perseverance that accompanied our positive thinking in the past isn’t as robust as it once was.

Will I stop being a positive, optimistic thinker? Not likely. But I will ask more questions, listen with greater attention to the answers, be more willing to face the brutal truth, reassess my own capabilities based on my current age and health, and act more quickly once reality reveals itself.

Entrepreneurs need to be optimistic, positive thinkers or they would never start, let alone sustain, a business. The very trait that makes us successful in the early years could cause our downfall when the world changes around us.