Small Changes in Your Sales Process = Huge Increases in Income

With apologies to Richard Carlson who wrote Don’t Sweat The Small Stuff (and It’s All Small Stuff), I’d like to suggest that, in sales, the small stuff is important.

Now to be fair, I do agree that we shouldn’t get hung up on things that we can’t change. There’s no use exploding over traffic gridlock, construction, or spilled milk. But sometimes, the small stuff is critical.

The difference between successful and unsuccessful salespeople in the same office is often just the small stuff. With the same product information, similar territories and opportunities, their results can differ dramatically because of the little things.

What little things make a difference? Consider these small modifications:

The Success Ratios chart below illustrates how the small stuff can make a big difference. Salespeople with a moderate, performance-based income of $75,000 can make significant changes in their personal income by making some small adjustments. Two extra phone calls per day increases their income by 17%, even if nothing else changes! Improving their ratio of phone calls to appointments by 3% increases income by 20%, and improving their ratio of appointments to sales by 8% increases their income by 40%! 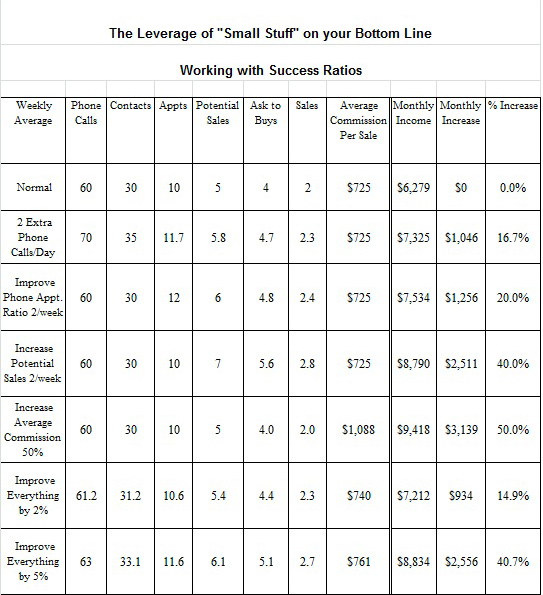